Trip Holiday Tyrol
Fly to Kitzbühel by Sennair VIP helicopter or enjoy a sightseeing flight across this sophisticated alpine town. Combine your stay in Kitzbühel with the most exclusive way of arrival and departure: With the Sennair VIP helicopter, you experience the mountain world around Kitzbühel at eye level and you avoid long journeys and annoying traffic jams.

Kitzbühel is situated in 800 metres above sea level at the base of the Hahnenkamm, measuring 1,712 metres, and the Kitzbühel Horn, measuring 1,996 metres. The famous tourist destination is worth a visit in any season. Famous the world over is Kitzbühel of course for its legendary Hahnenkamm Races. The world’s best ski racers compete for the coveted trophies on the “Streif“ and at the “Ganslernhang“ in January every year. These exciting races regularly attract up to 100,000 visitors. The international high society also meets at the Hahnenkamm Weekend in Kitzbühel – under the motto: To see and to be seen.

The Kitz-Ski resort includes Kitzbühel as well as the neighbouring towns of Kirchberg, Jochberg and Pass Thurn and offers 53 cable car and lift facilities with 170 piste kilometres. This ski resort is one of the biggest interconnected ski resorts in Austria and has received several awards: e.g. World’s Best Ski Resort (Skiresort.de). Cross-country ski fans can look forward to 32 kilometres of freshly groomed cross-country ski tracks.

Many famous people can be encountered in Kitzbühel all year round - in winter as well as in summer. After all, the town with its historic centre offers beautiful restaurants, cafés and well-known bars which invite to stay a while. In addition, there are many shops and boutiques. Famous brands like Louis Vuitton, Rüschenbeck, etc. let shoppers‘ hearts beat faster. The town is also home of the Sportalm company which is known for its beautiful and exclusive skiwear and traditional fashion.

Apart from the Hahnenkamm Races, Kitzbühel is also the venue of many other famous sports events, like the “Generali Open“ ATP Men’s Tennis Tournament in July or August, and one of the stages of the annual Tour of Austria cycling race leads uphill to the Kitzbühel Horn.

Kitzbühel and its vicinity offers many possibilities for sporty guests: Four golf courses, 120 kilometres of mountain bike routes and 500 kilometres of hiking trails are available. A refreshing swim in Lake Schwarzsee with view to the Wilde Kaiser complements a sporty day on your holiday. There is also a curling rink and the Aquarena centre. With all these possibilities and the beautiful surrounding area, it comes as no surprise that many famous people live in Kitzbühel or spend their holiday there.

A special experience is a sightseeing flight by Sennair VIP helicopter. Whether for a wedding, birthday, engagement, marriage proposal or a company anniversary, treat yourself to this special highlight or surprise your loved ones.

Our team is happy to provide advice and we are looking forward to welcoming you on board of one of our Sennair VIP helicopters. 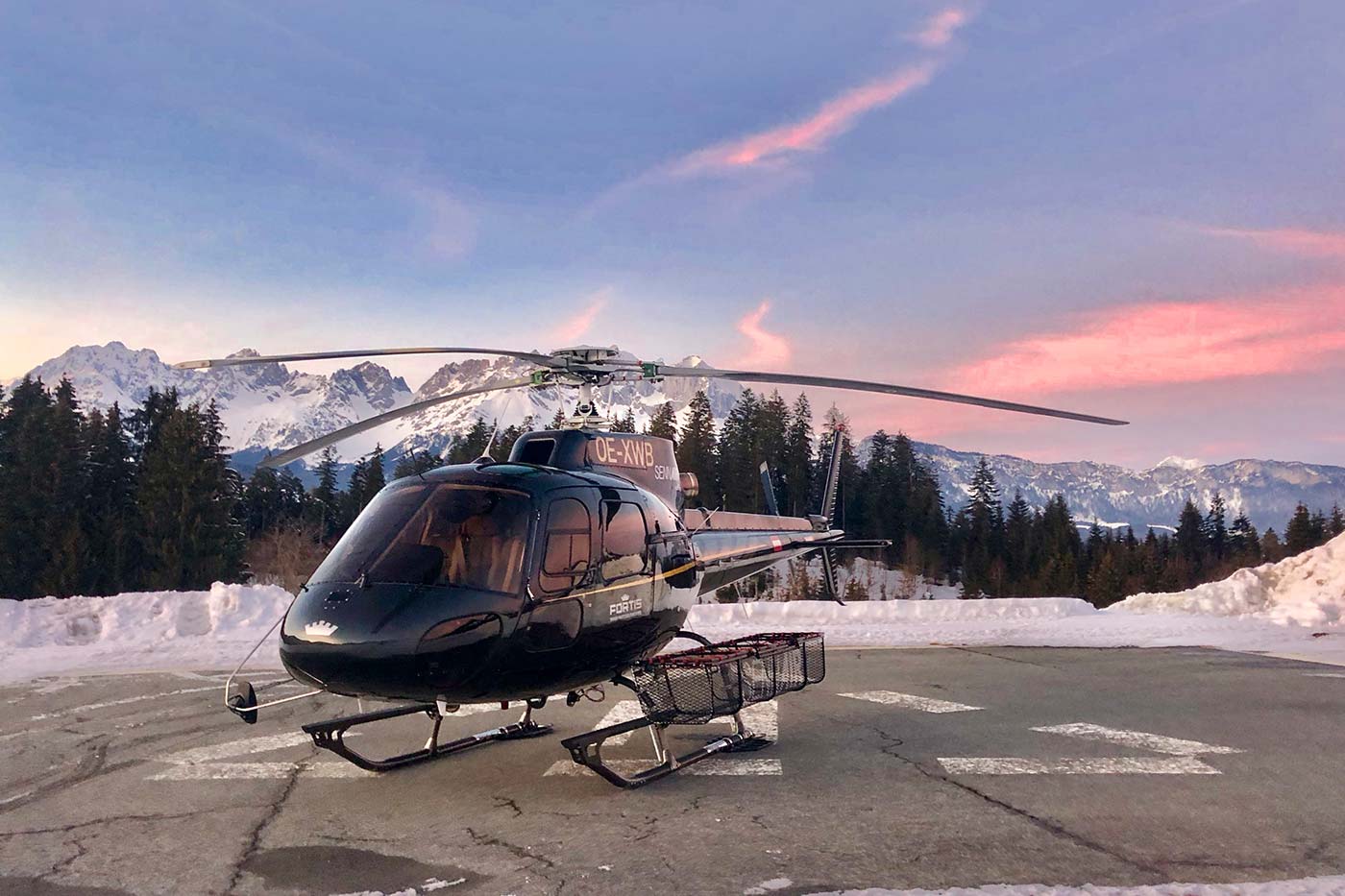 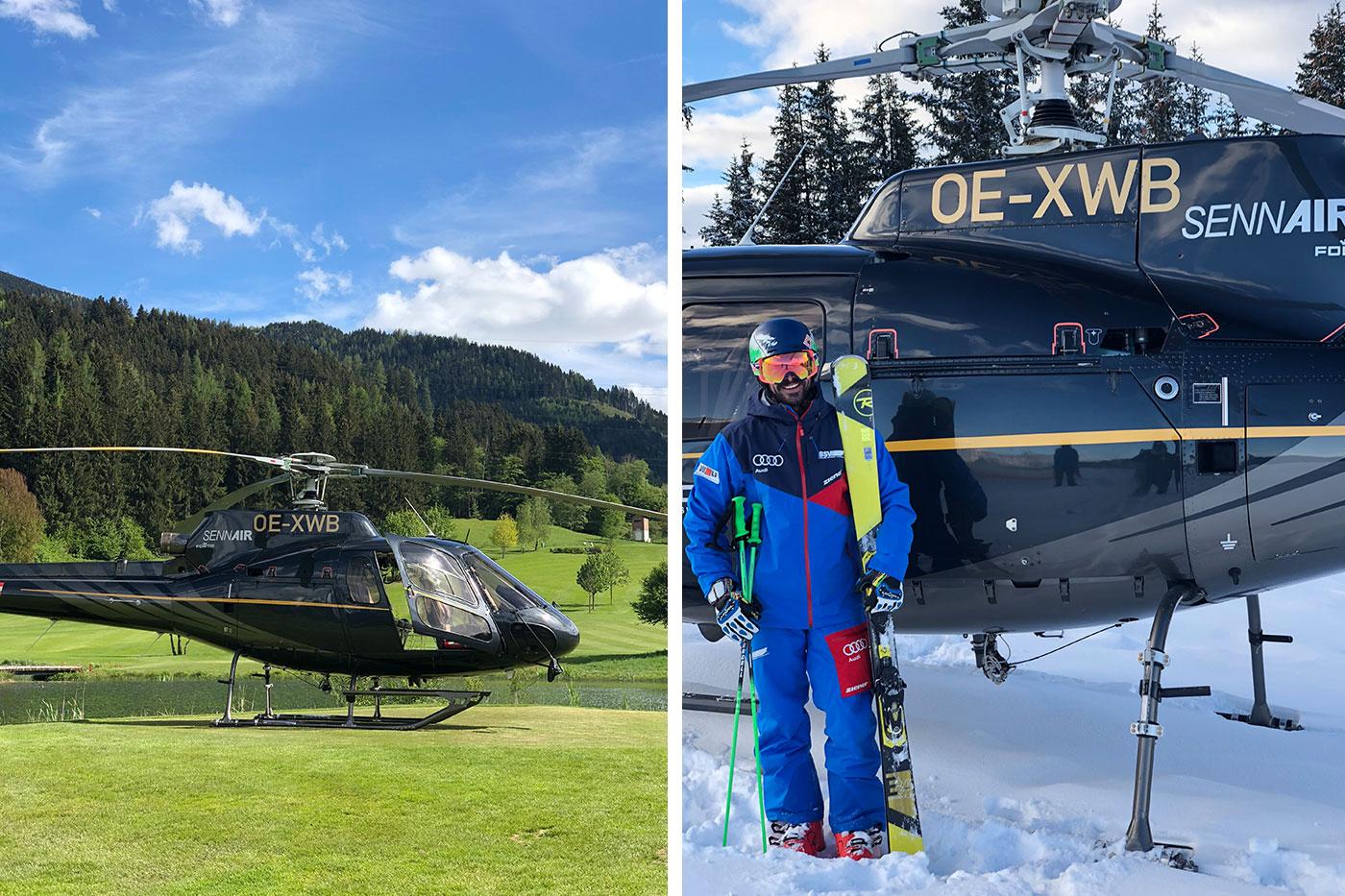